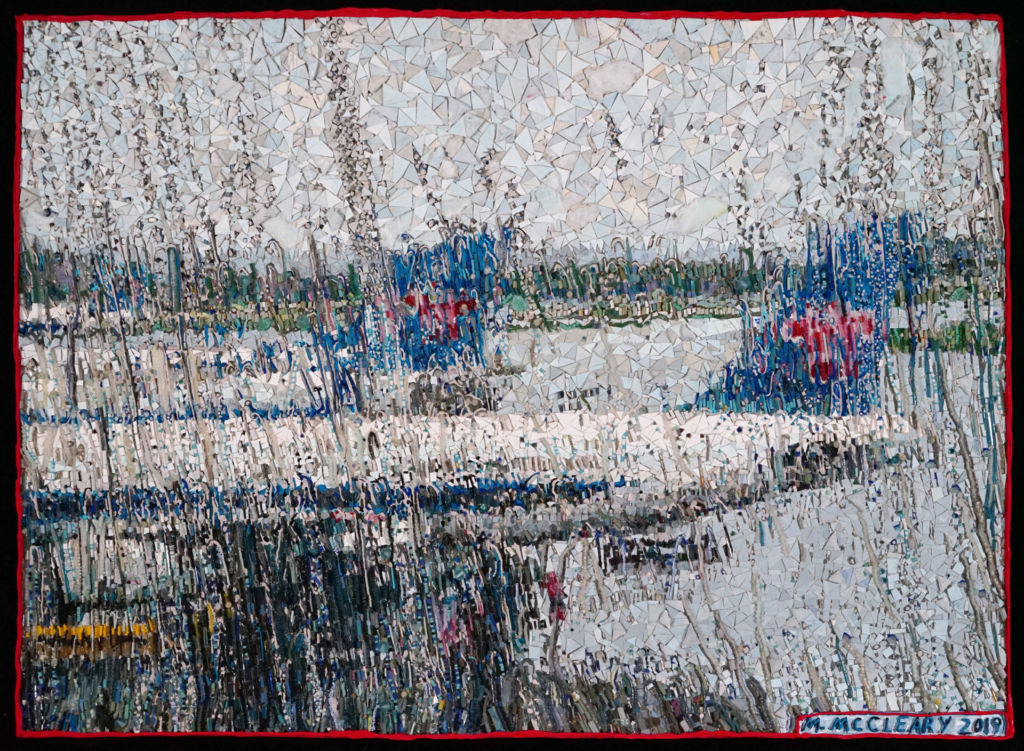 Born in Houston, Texas in 1951, Mary McCleary’s legacy goes back to 1838.  It begins with a captain in the Texas Rangers who eventually became a pastor.  A descendent of individuals who held a deep appreciation for artistry and craftsmanship, McCleary builds compelling collage images out of diverse materials such as painted paper, sticks and string, glitter, beads, old postcards and even the small toy charms from a gum machine.  She derives her subject matter from sources as diverse as art, film, literature, history and science.  Usually, her works point to meanings well beyond these subjects.

A reverence for history, physical remnants and the stories that they hold, pervades McCleary’s work.  The women in her family admired the decorative arts.  Growing up, Mary visited museums and historical homes throughout the United States.  As a child, she and her sister played docent, emulating the many tour guides they had met while making up stories and taking imaginary guests through their home.  Her interest in art started early.  She eventually earned her B.F.A. at Texas Christian University in Ft. Worth, and an M.F.A. from University of Oklahoma.  McCleary lives in Nacogdoches, Texas where she taught at Stephen F. Austin State University from 1975- 2005.

McCleary began making collages around 1978. The early ones were small, simple and abstract, and over time they became larger and more complex. She started making representational work when she became a Christian around 1985. McCleary had grown up going to a mainline church and Sunday school every week. She was young when she started asking “the big questions” but had a hard time finding adults who offered adequate answers.  In high school she was allowed to sit in on adult Sunday school classes.  She was introduced to theologians like Buber, Barth, Kierkegaard and Tillich, but became an agnostic during college.  God started planting seeds around 1981when McCleary discovered apologists such as C.S. Lewis and Josh McDowell, among others. She dove into studying Christianity and the Bible intensely, and her artwork became an outlet for her discoveries. “I tend to pour myself into what I’m doing so all of that study impacted my work.” 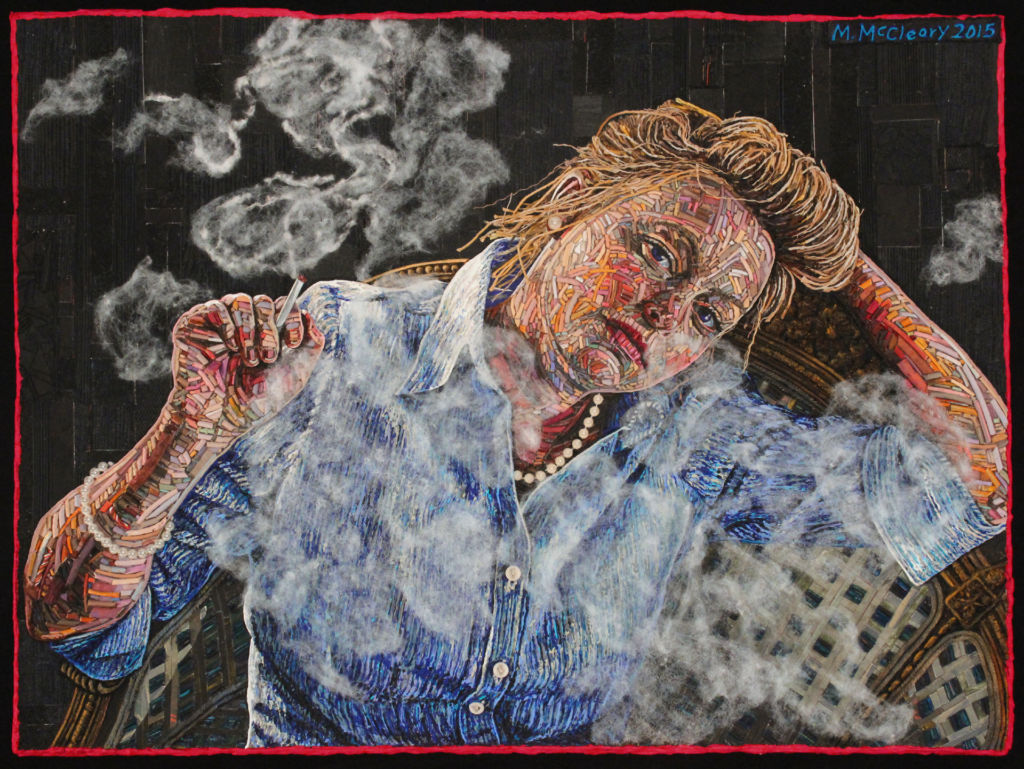 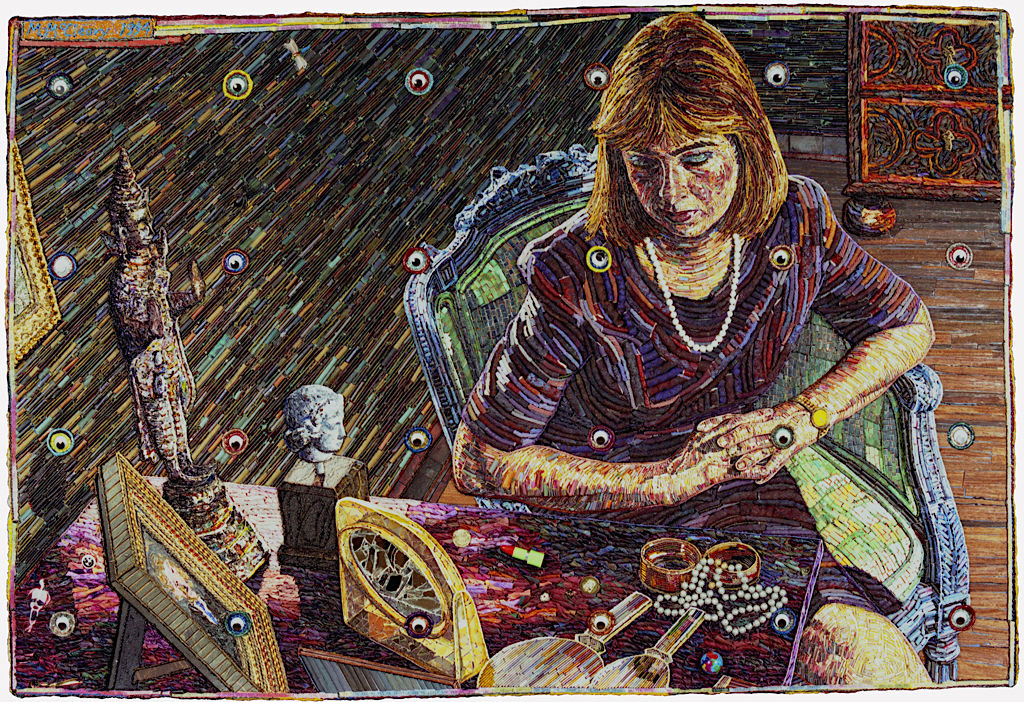 From around 1985-1995, McCleary’s collages were a modern retelling of the stories she was studying in scripture.  Mrs. Potiphar, the 30” x 44” collage, presents a woman wearing a stylish, but modest dress and pearls.  She sits at her dressing table, laden with Eastern and Greek deities, looking despondent. “I wanted to get into who she was,” says the artist.  “Maybe a corporate executive’s wife alone at her dressing table.”  In this image the wife of Potiphar, often labeled as brazen, is someone who is lonely.  The artist explores the motivation of this woman, known for her infatuation with her husband’s servant in Genesis Chapter 39.  McCleary uncovers the humanity in someone often portrayed as a caricature.  Her collage makes no excuse for Mrs. Potiphar’s actions, but acknowledges her emotions and circumstances.  The artist approached well-tread territory in the art world in her own way, “So many artists from Orazio Gentileschi, to Rembrandt and others have portrayed this subject.  You can’t copy what they did, so you have to try to provide your own insights.”

For the past 25 years, McCleary has focused not on overt Biblical subjects, but allegory, poetry, and historical subject matter.  But her work is still informed by her faith.  She says, “It’s the lens through which I see the world.  In a sense I am creating my own parables.”

Currently, the artist’s work is on view in “Telling Stories: Reframing the Narratives,” an online exhibit through the Parrish Art Museum, located on Long Island, New York.  The space is closed due to the Covid-19 Pandemic, but the museum is constantly developing materials online to offer engagement with the exhibition.  A catalogue is also available on the Parrish Art Museum website.

McCleary is currently working on a large collage, a project that has already taken over a year to do.  It’s an interior scene of a family which will be shown later this year in Houston at Moody Gallery.  After that she will make a small collage for her new great-niece as she has done for other young members of her family.  She hopes those works will foster a thoughtful sense of wonder, just as the items in her childhood home did for her. 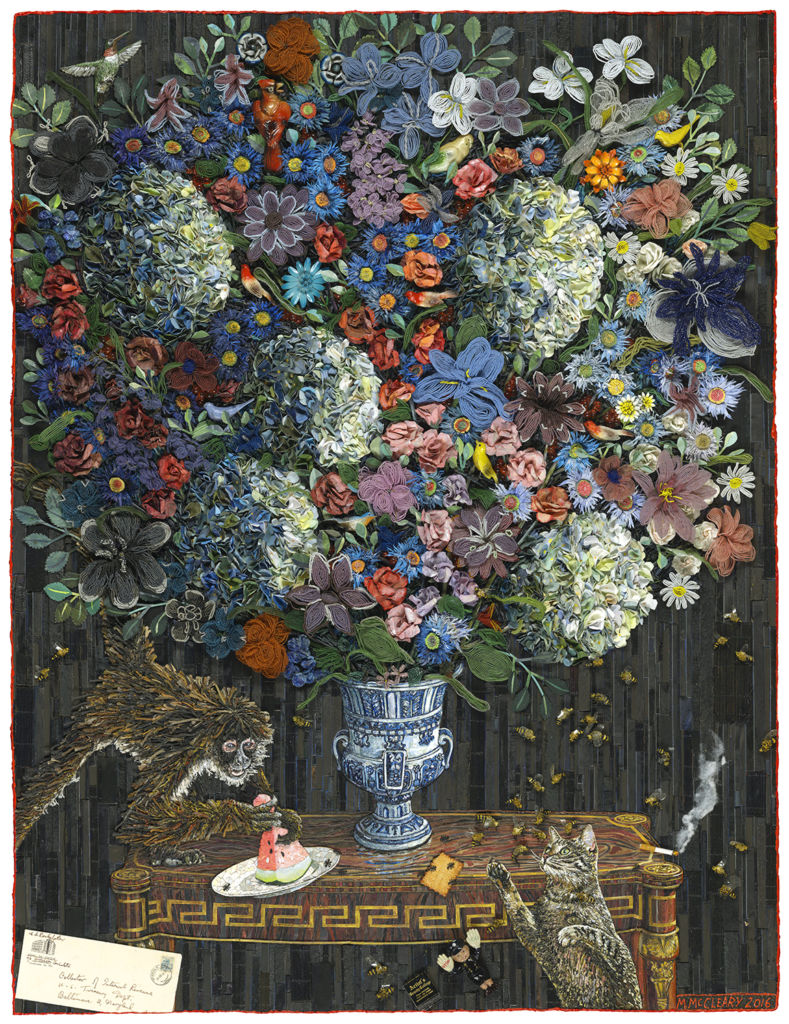 “Grateful Reverence for the Way Things Are” (2016)